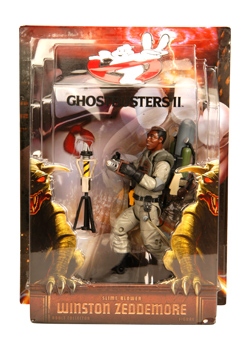 With the release of the 6″ Ghostbusters 2, slimer-blower packin’ Winston, Mattel has announced their Ghostbusters release schedule for the rest of the year. Barring any changes, which are always a possibility, due to production and shipping issues, here’s the rundown;

We still have one Ghostbusters 6″ Club Ecto-1 figure to reveal for 2011. That figure will ship in December and be revealed at SDCC along with the first 2012 figure! Just keep in mind that like what happened with our original Zeddemore sale date, various issues (like a potential fourth reconciliation of the last of the McKetrick supplicants or a mass sponge migration, for example) can cause things to get switched up so the schedule isn’t final until, well, it’s final. I’ll be sure to keep you updated because there are tons more great toys coming!

The “can’t announce yet” is most likely the second prop item – the first prop, the PKE meter, was announced at SDCC and went on sale in October, so it makes a certain amount of sense that they will do the same again this year.

As a small bonus, they included this Lab Coat Egon photo;