END_OF_DOCUMENT_TOKEN_TO_BE_REPLACED

The latest issue of Previews magazine is taking orders for the monthly GB comic from 88mph Studios and
includes a sketch of the varient cover. Now’s as good a time as any to ask your local comic shop to add it to your
account (I know I sure did.) On their website 88mph posted a nice

colour version of the regular
cover. Also, the word at
GBHQ has it that GB:Legion number one will ship April 7th, so keep an eye out.

Newsarama has posted four interior pages from the first issue of the Ghostbusters: Legion series and all the alternate covers, including
our first look at the final Egon / Brereton cover
(but with the exception of the UV incentive cover.) Sweeeet! The interior art is even colored. Don’t keep
reading, you should be
checking out the sneaks! 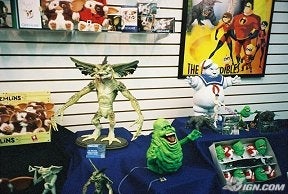 One website has begun offering the Dancing Slimer, at a price of $29.99US (that is not the manufacturer suggested price, and should be taken with a grain of salt) and Figures.com has this great close-up of the spud, which shows the dancing controls better. The control looks a little, well, bare, so my suspicion is that the controls are in the base of the figure, but were rigged up by wire for the show, so people wouldn’t have to handle the display.

Filmforce at IGN has great ongoing coverage of this year’s New York Toy Fair, and in their sizable coverage of NECA’s various hot properties, they made passing mention of the Ghostbusters line – they also included a nice picture of some of the GB items at the NECA booth, including the action figures, the string lights… AND A REALLY BIG SLIMER! Using the 15 inch Mohawk (from Gremlins) and Mr. Stay Puft in the back, the slimer figure is about 10-12″ tall. Is it a bust? Is it a maquette used by the production team? And what’s that wire running from it? Well, UGO turned up the answer with their
coverage of the fair.” As for Slimer, don’t miss out on a large, rubber-skinned statue of the ghost that dances around to the Ghostbusters’ theme at the push of a button. OOOOooooooooh. They also put it’s release date at April, but word from Randy makes it sound more like June.